A few years ago, when I was studying in the tourism program at Cégep de Matane, I decided I wanted a summer job on a cruise ship. Gathering up my courage, I sent my application to CTMA Cruises and was very pleased to hear I’d landed a position as an entertainment officer aboard the CTMA Vacancier for the summer of 2007. In early June, before officially becoming a member of the crew, I set off to explore the Îles de la Madeleine. The CTMA Vacancier (which soon became “my boat”!) sails between Montréal and the Îles de la Madeleine every week and spends several days anchored in the archipelago. The ship can accommodate up to 400 passengers, on top of the 100 or so crew members, who work hard to ensure the well-being of all and keep the ship running. 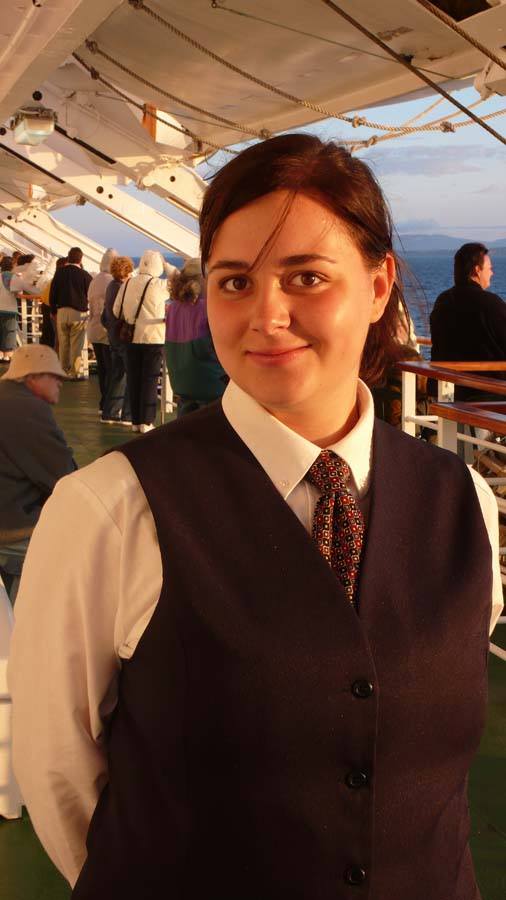 A little souvenir of an amazing summer!
© Camilie Beaulieu

As soon as I set foot on the ship, I immediately felt at home. I had been a bit worried, because most of the crew had known each together for years. They knew each other because they worked together, obviously, but also because everybody knows everybody in the Islands (or just about!). Though travelling to the archipelago early had given me the opportunity to begin my immersion in island life, it was life onboard that really made the difference. I must admit that I had a hard time understanding people at first, because I wasn’t used to my colleagues’ accents. During one conversation, I even asked: “Are they speaking English?” (The people around me thought this was hilarious, even though I wasn’t actually joking!) I did get used to the accent fairly quickly (although my colleagues assured me I was the one with an accent) and even picked it up a bit. Passengers occasionally asked me if I came from the Islands, Gaspésie or the Saguenay region. In other words, I no longer sounded like a Québec City girl, but they weren’t sure where I was from!

Since I wasn’t from the Islands, the boat was my home for nearly four months. I lived on it in good weather and bad, whether we were out at sea or anchored in port. When the engine was running, it put me to sleep in no time. I even got to the point where I had trouble sleeping when it wasn’t running! In the mess hall, the crew had access to a large dining room and lounge where we could watch TV. All meals took place in a friendly and festive atmosphere, as we sat around large tables and had our orders taken by a friendly man. We always ate well! When we were on the Islands, meals were still available onboard, since there were always people working on the ship, seven days a week, twenty-four hours a day, even when the passengers were off exploring.

Week after week, I feasted my eyes on the beautiful sight of the sea (which is what the people of the maritime regions of Québec call the St. Lawrence River, Estuary and Gulf). For me, every Friday was the beginning of a new adventure: this was the day the boat set off from Montréal. I felt energized by the excitement of the passengers, who had finally treated themselves to a cruise on the St. Lawrence and were about to explore the Islands for the first time. Meeting them, reassuring them and preparing them for this adventure were tasks that I took very seriously. In the late afternoon, once everyone was onboard, a blast of the ship’s whistle signaled the official beginning of the cruise. 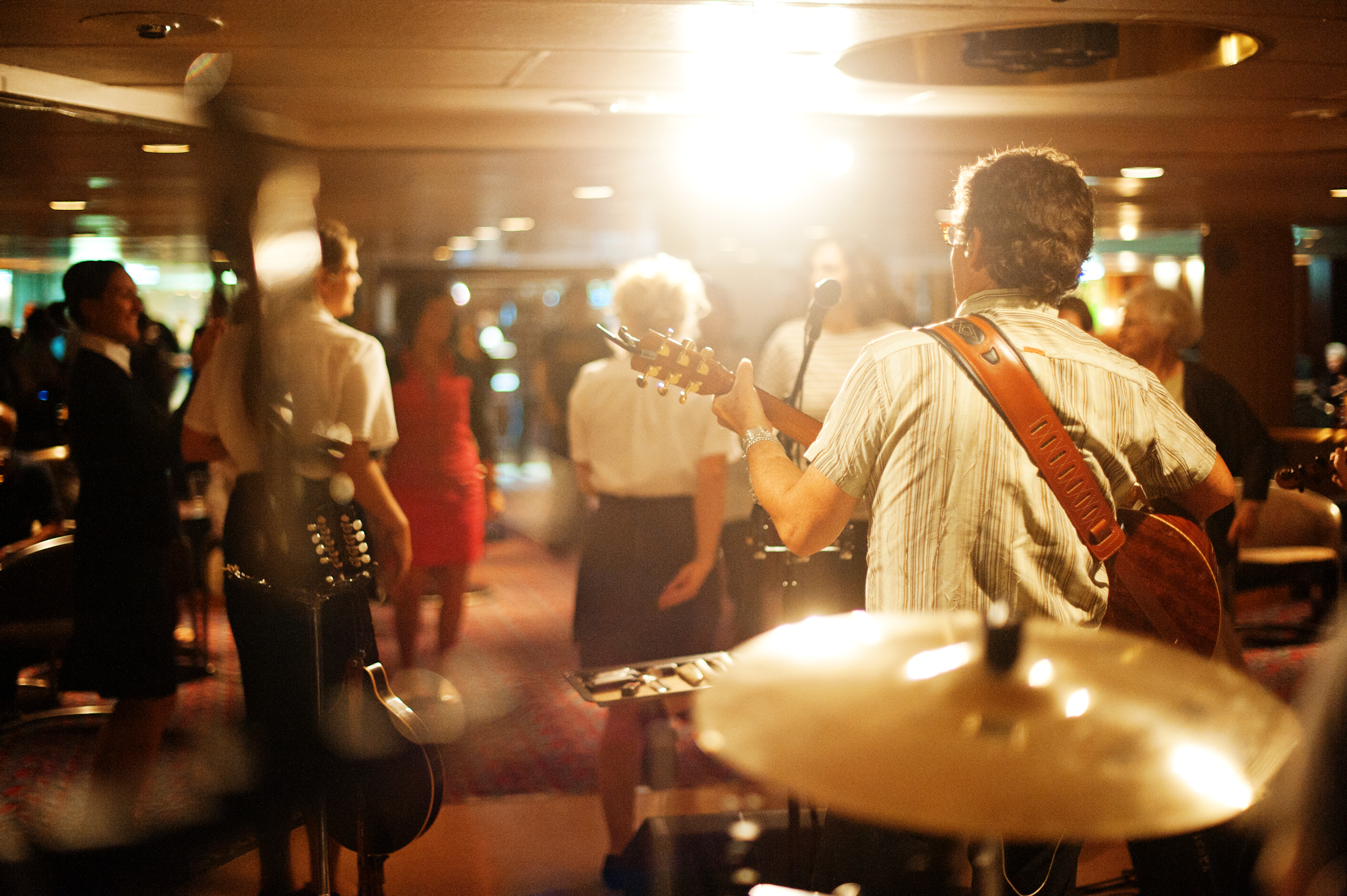 The always festive atmosphere aboard the CTMA Vacancier © Croisières CTMA

As an entertainment officer, my responsibilities were varied. I was in charge of kids’ activities, such as organizing treasure hunts, doing arts and crafts, playing with them, etc. I also co-led Saturday morning bingo with a colleague (a classic Saturday activity!). Bingo games were really an excuse for spontaneous fun of all kinds! I also provided passengers with information about the main points of interest we passed during the cruise. Mainly, I made sure everyone was having a good time, by chatting with the passengers and entertaining them.

Working for CTMA as an entertainment officer also meant long days of work. I started early in the morning and ended late in the evening, with several hours off in the middle of the day. I also had the opportunity to practise my line dancing moves while on the ship! It was a talent that saved the day during a nasty storm we hit in Gaspésie. The sea was rough and many of the passengers were feeling seasick. The ship’s musician kept playing, despite the fact that the guests were looking a little green. Full of enthusiasm, I made my way to the dance floor and, little by little, the passengers joined me in a line. We danced with the waves (literally—we had to move with the moving ship or we would have fallen over)—and no one was sick because they were too busy having a good time!

Heading to the Islands

Every Friday, as the ship got ready to leave the port of Montréal and the passengers’ excitement mounted, I felt proud to be setting off to sea. Discovering the St. Lawrence aboard a ship is one of the best experiences I’ve ever had. Montréal is never as beautiful as when seen from the water. Passing under the Laviolette Bridge in Trois-Rivières at sunset made the bridge look oversized. The beautiful city of Québec illuminated at night was also an impressive sight, for those who stayed up late enough to see it. For early risers, the whales in Les Escoumins put on a show as the pilot left the boat in the capable hands of the captain and his officers. Every Saturday morning, I made the effort to get up early enough to join the few other brave souls on the bridge watching the whales. I say “effort” but really it was a pleasure to chat with the passengers and share my knowledge of these marine mammals as we admired them in the quiet Côte-Nord mornings. 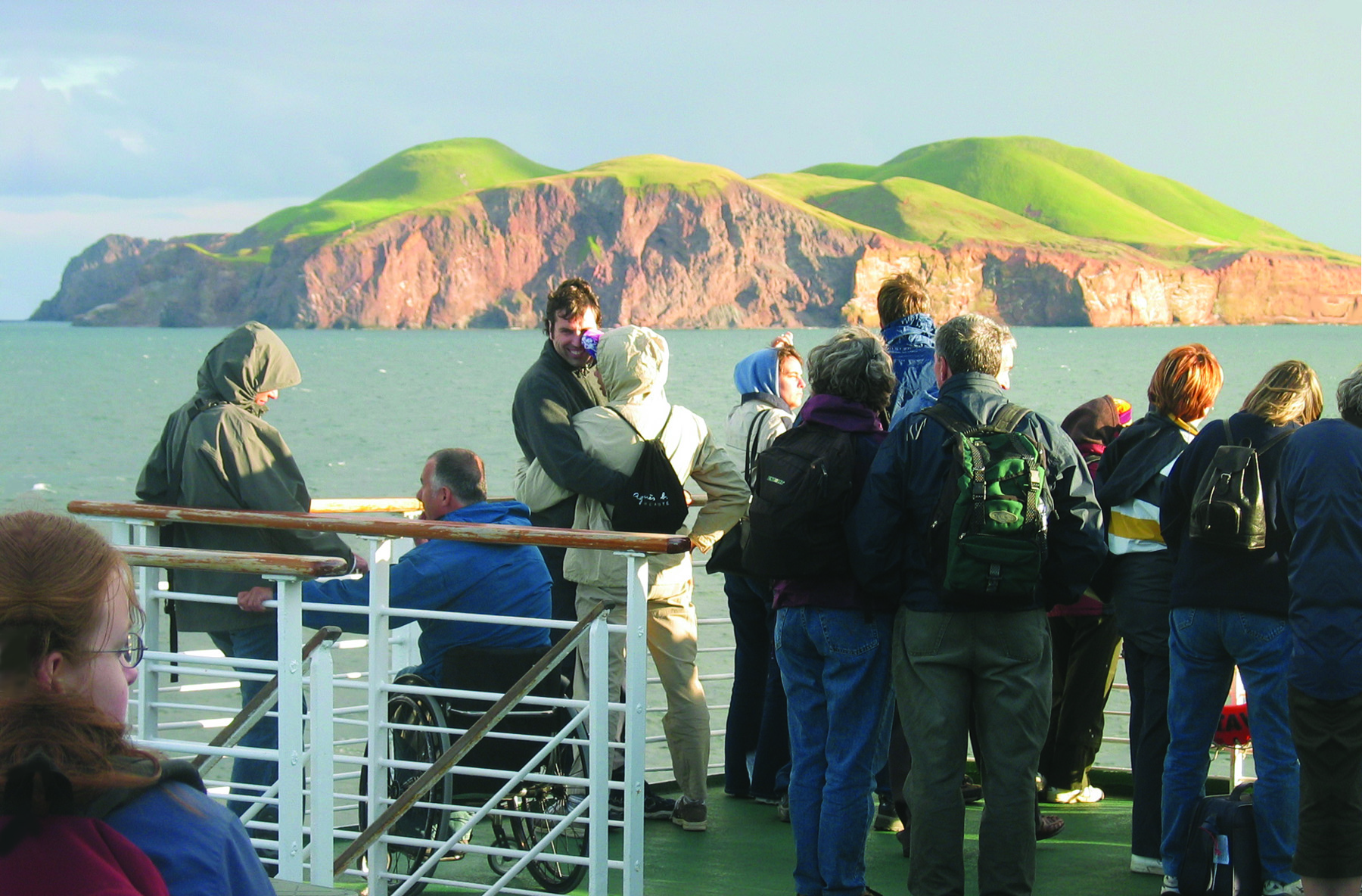 View of Entry Island from the boat
© Sylvio Aucoin/Croisières CTMA

And what a privilege it was to tour the Gaspé Peninsula by boat! The Gaspésie region is magnificent by road, but it’s just as majestic seen from the Vacancier. Percé Rock and Bonaventure Island at sunset are truly stunning—the sight of them was one of the highlights of my summer. Another high point of the cruise is watching the thousands of northern gannets that nest on Bonaventure Island diving for fish to feed their young. (This colony is the most accessible in the world and one of the largest.) On Sunday mornings, when I caught sight of the red cliffs of the Islands on the horizon, I could barely contain my excitement. Seeing the shining eyes of the passengers, I remembered that only a few weeks ago, I too was discovering the Islands for the first time and making a dream come true. Each time I set foot on the archipelago, I felt grateful for this opportunity to work on the ship. There was a small section of the bridge that was reserved for the crew and I spent many evenings there, contemplating the stars as we sailed towards the Islands, far from light pollution.

Once the ship arrived in the Îles de la Madeleine, I spent my days off exploring the archipelago. I loved lounging on the Islands’ fine-sand beaches, which gave me the feeling of being in a completely different country. I also loved admiring the red cliffs, which contrast with the Islands’ green hills and golden sand dunes. I explored the archipelago’s caves by kayak, by Zodiac and in a flotation suit. I savoured delicious and abundant seafood and filled my ears with Acadian music at every opportunity. In other words, I fully immersed myself in the world of the Maggies, making the most of every moment as if I was on vacation too!

Thinking back on that summer now, I realize how lucky I was. One day, I’ll go on a cruise on “my boat” once again to my beloved Islands. I couldn’t have asked for a better way to discover the Îles de la Madeleine (and the St. Lawrence) than by being part of the crew aboard the Vacancier. It’s the perfect way to partake of all that the Islands have to offer, from the warm welcome of the friendly crew to the delicious food served onboard the ship. Visit the CTMA Cruises profile to embark on your own adventure aboard the CTMA Vacancier!