It’s impossible to talk about winter sports without mentioning skiing. I’m amazed at all the possibilities available in the maritime regions of Québec: telemark, alpine touring, hok skiing, splitboarding, downhill skiing, snowboarding, catskiing and heliskiing. To satisfy my curiosity, I decided to do further research and learn more about each of these activities and find out where you can try them out.

Telemark is in some ways the ancestor of downhill skiing. The skis are similar, except that telemark skis have free-heel bindings. The boots are also more flexible. When turning, telemark skiers bend the inside knee while downhill skiers transfer their weight by bending both knees to turn.

You can go telemark skiing at Chic-Chac, at the Auberge de Montagne des Chic-Chocs and in Parc national de la Gaspésie.

Alpine touring allows you to enjoy downhill skiing in the wilderness. The bindings are lighter than on regular downhill skis and the heel unlocks for climbing. To provide traction in the uphill, you put on a climbing skin (whose texture is similar to sealskin) on the base of your skis. Once at the top, you take off the skin from your skis and lock the heels of your bindings, and you are ready to go down!

You can go alpine touring at Chic-Chac, at the Auberge de Montagne des Chic-Chocs and in Parc national de la Gaspésie. As its name implies, a splitboard is a snowboard that splits in two to allow you to climb the mountain in a similar fashion as on skis. As with alpine touring, a climbing skin is attached under each half of the splitboard for climbing. To go downhill, you just bring the two halves together to recreate the board.

You can go splitboarding at Chic-Chac, at the Auberge de Montagne des Chic-Chocs and in Parc national de la Gaspésie.

Hok skiing is a hybrid of snowshoeing and skiing. It is also called snowshoe skiing. The skis are wider and shorter to improve stability when walking. They also have climbing skins. This activity is rapidly gaining popularity among outdoor enthusiasts.

You can go hok skiing at the Auberge de Montagne des Chic-Chocs and in Parc national de la Gaspésie.

Note that Parc national de la Gaspésie and the Auberge de Montagne des Chic-Chocs do not provide mechanical lifts. Climbing to the top is part of the experience. However, some specialized companies offer catskiing (skiers are taken to the top of the mountain by snowcat). Please visit this page for more details.

Traditional downhill skiers and snowboarders also have great runs to ski and ride, notably at Parc Régional Val-d’Irène in the Matapédia Valley.

With 26 runs on two mountain sides, a snow park and several activities for non-skiers, it will satisfy all types of sports enthusiasts. According to my colleague Zoé, more experienced skiers and snowboarders will want to hit the slopes on the north side of the mountain. And for a unique experience, enjoy a meal at the top of the mountain at the L’Altitude restaurant; the only restaurant in Eastern Québec located over 2000 feet above sea level! 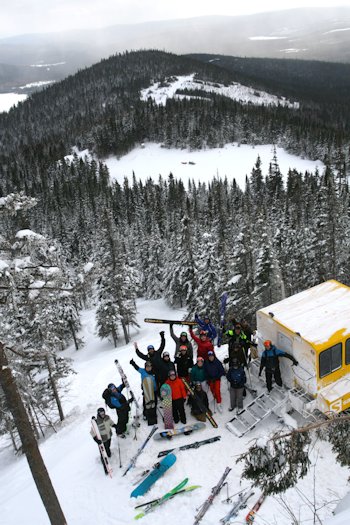 Getting ready to hit the slopes after catskiing up the mountain!© Chic-Chac

Catskiing brings together the best of both worlds for downhill skiers and boarders. The activity is held in a natural environment, on powder-filled slopes, which you access in a snowcat. When you get at the bottom, the snowcat is right there, waiting to bring you back up.

Chic-Chac, in Murdochville, offers various guided catskiing packages. An interesting detail for thrill-seekers: about 30 platforms simulating cliffs have been set-up on the slopes of York Mountain, one of the areas where Chic-Chac operates.

It is also possible to go catskiing with other companies in the region. For more details, visit this page.

You probably guessed it; heliskiing is similar to catskiing, except that you get to the top in a helicopter. Chic-Chac offers heliskiing packages in the whole skiing area around Murdochville.

Winter sports enthusiasts will most certainly be pleased with the many options available for the maritime regions of Québec. Are you one of them? Please visit this page to find out more details for your next vacations in our area.

Tags skiing snowboarding winter
Categories What to Do in Winter