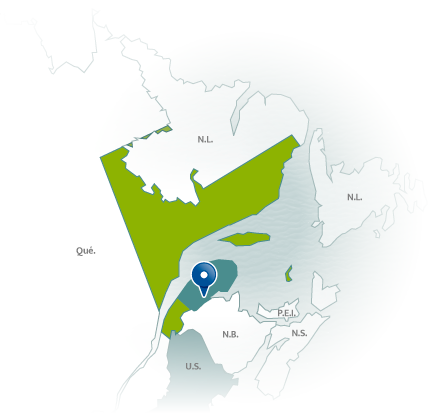 Gaspésie is a land of contrasts. While 25 of the highest peaks in Québec are found in the interior of this vast peninsula, the Gaspé coast is surrounded by unique beaches and unforgettable views. Not only is this region home to legendary Percé Rock, but it also boasts four national parks, world-renowned salmon rivers, a rich history and a multitude of talented chefs, artists and artisans.

The scenery of Gaspésie is also charming in the winter. Mountain sports enthusiasts will be thrilled by the many opportunities to explore the Chic-Choc Mountains and other parts of the Appalachians while skiing, snowshoeing or snowboarding. In addition, the Gaspé Peninsula is renowned as a snowmobile destination, offering nearly 2000 kilometres (1200 miles) of trails with breathtaking views.

To plan your trip, visit our Gaspésie section.

Off the Coast of Gaspésie… A Sea of Flavours!

Surrounded by the Estuary and Gulf of St. Lawrence and bordered to the south by magnificent Chaleur Bay, Gaspésie is one of the most beautiful regions in the world. Originating from the Mi’gmaq word Gespeg, which means “land’s end,” Gaspésie is a vast peninsula at the edge of the world that also offers a cornucopia of culinary delights to discover!

Are you a backcountry ski enthusiast? The Chic-Choc Mountains, in Gaspésie, are undoubtedly on your bucket list! And there’s no better way to explore these mountains than by calling upon the services of passionate and professional guides such as the team at Ski Chic-Chocs!

Savour the Unique Flavours of Gaspésie

Between sea breezes and wild forests, remote mountains and lively fishing harbours, cultivated fields and colourful villages, Gaspésie is home to a wide variety of landscapes that provide a wide range of locally grown and locally produced food.

What to See by Snowmobile in Eastern Québec: Mont-Saint-Pierre

Gaspésie is known for its spectacular sea and mountain scenery. One of the best places to soak up these landscapes is in Mont-Saint-Pierre, on the north side of the peninsula. Once winter comes, the scenery takes on a whole new kind of beauty but remains just as impressive. Here’s a glimpse of what awaits you in this area.

You may feel like you know all about Gaspésie—you’ve probably been hearing about this region for years, have seen famous Percé Rock on postcards and have heard about how welcoming the locals are—but this destination still has many surprises in store for you! Read on to discover why travellers fall more deeply in love with Gaspésie every time they visit!

Over the past few years, Gaspésie has become an increasingly popular winter destination. Offering impressive amounts of snow and picture-postcard scenery, it has something for everyone! See for yourself through these photos found on Instagram.

Snowmobiling in Gaspésie: A Glimpse of What Awaits You!

Gaspésie is a popular snowmobile destination for good reason! Lots of snow, breathtaking views and well-maintained trails are just some of the elements that make this region so appealing.

7 Snowmobile Rides to Explore in Gaspésie

Offering 3000 km (1900 mi.) of marked and groomed trails as well as snowmobile-friendly accommodations, Gaspésie is a great destination for your next snowmobile expedition! Consider including these rides in your itinerary.