It’s still dark when the crab fishing boat leaves the Rimouski marina. In the cold April morning, the Pêcheries Malécites vessel heads north across the St. Lawrence Estuary towards Côte-Nord. Off the coast of Forestville, dawn breaks in a blaze of orange over the horizon as the crew begins a long day of work by throwing about 50 traps overboard. The boat will then head back towards Bas-Saint-Laurent to retrieve its first snow crab catch of the season. By the afternoon, snow crab will be available in all the maritime regions of Québec, and the next day, it will have made its way to Montréal and Québec City.

Snow crab is the king of the cold salty waters of the St. Lawrence Estuary, an exceptional seafood delicacy from the maritime regions of Québec. Snow crab fishing also marks the beginning of the fishing season in late March or early April, depending on the year. This crustacean is also fished later in the spring in the Gulf of St. Lawrence off the Îles de la Madeleine as well as south of Nova Scotia and Newfoundland.

Gourmet seafood lovers (especially in Japan) prize this long-legged crustacean even more than lobster. Snow crab has a delicate texture with a sweet nutty flavour and the flesh is both tender and firm. In addition, it’s as nutritious as it is tasty: while 100 grams of crabmeat only provide 115 calories, it’s high in protein (23 grams). Snow crab is also high in iron and vitamin C and contains very little fat or cholesterol… as long as you forgo the mayonnaise or butter, obviously. Once you’ve tasted fresh snow crab in the spring, you’ll be hooked! The rest of the year, it’s available frozen, thawed or canned, but it’s obviously much tastier fresh.

Bas-Saint-Laurent native Pierre Girardin drives his refrigerated truck back and forth between Rimouski and Montréal every week from late March to early May.

“Captain Crab” picks up the snow crab catch from the Rimouski marina as soon as the fishing boats return to port, and then drives to Montréal to sell the catch in the big city’s public markets. As a child, he remembers waiting for the boats to return and collecting discarded snow crab off the wharf. At the time, snow crab had no commercial value and was considered a nuisance because it got tangled in fishing nets and damaged them. Now much sought after, it is a sustainable product, since the fishery is controlled by quotas that vary from year to year. 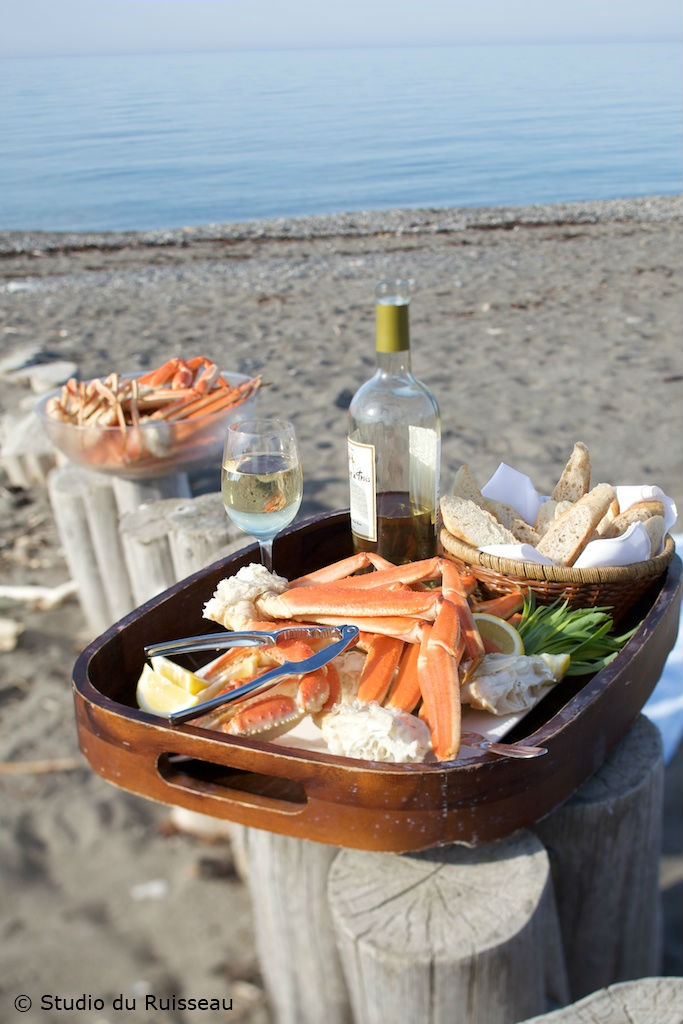 Snow crabs are crustaceans with flat round bodies and five pairs of spider-like legs (including the front claws). Males can grow to a carapace width of about 15 cm (6 in.), and are the only ones to be trapped (to preserve the species). They can weigh anywhere from 350 grams (12 ounces) to 1.3 kg (nearly 3 pounds). Snow crabs vary in colour from sandy brown to light orange; when cooked, they turned a bright orangey red.

The arrival of fresh snow crab in fish markets marks the real beginning of spring in Québec. Snow crab is generally available precooked, in sections of four legs and a front claw. Plan on serving two or three pieces per person for a main course or one each as a starter.

You may prefer to buy live snow crab and cook it yourself (be sure not to overcook it!). This way your guests have the challenge and fun of shelling their own crab to savour the white meat found in the legs and body. You can also try eating the greenish tomalley, which has a strong taste. To cook the crab, seawater is recommended, but you can also add fine or coarse salt to enough water to cover the crabs. Bring the water to a boil and plunge the live crabs into it; once it boils again, cook the crabs for 10 to 14 minutes. After 10 minutes, the flesh is very tender! You may then want to let the crabs cool on the counter or directly on the plates; you can also rinse them in cold water before serving (though some frown on this practice!).

In terms of snow crab recipes, simplest is best: one crab per person with a small dish of homemade mayonnaise or melted butter (without garlic), accompanied by a green salad and basmati rice. Don’t forget to provide your guests with crab crackers and picks. If there are any leftovers, no problem: you can serve crab for brunch or lunch with a poached egg, on toast with butter or olive oil, in a sandwich or spring roll, or for supper on pasta. Bon appétit!

For more information about snow crab...