The first people to pick cloudberries (Rubus chamaemorus) were the Innu, who called this perennial shekuteu, which means “fire” in their language. Cloudberries are also known by several other names: bakeapple or bake-apple berry in Atlantic Canada, knotberry or knoutberry in England, and averin, evron or highland gold in Scotland. They are also one of several species known as salmonberries.

Cloudberries resemble raspberries; however, when ripe, they are a soft and juicy golden yellow. These berries, which are emblematic of the region of Côte-Nord (they can also be found on the Îles de la Madeleine) have a unique and pleasing scent. In addition, they only grow in peat bogs, marshes and conifer forests.

Cloudberries generally mature between late June and early August; when ripe, they are a translucent amber colour. Avoid fruit that has black spots. Since only one in eleven plants will flower and only female plants produce berries, it is important to wait until the fruit ripens before picking it—if picked too early, the plant may not flower for another seven years!

Properties and uses of cloudberries 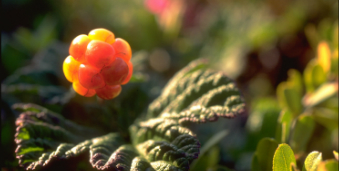 Cloudberries are rich in fibre and antioxidants (vitamins A and C). Their high benzoic acid content acts as a natural preservative, and their high potassium to sodium ratio makes them a suitable food for people with high blood pressure. In addition, several studies have demonstrated that cloudberry leaves have anti-cancer properties.

In herbal medicine, the tasty tea made from fresh or dried cloudberry leaves is used to treat urinary tract infections and digestive issues.

Cloudberries have an exotic sweet and tart flavour reminiscent of apricots with a touch of tropical fruit. The Innu eat the berries fresh or dried, with meat or fish. Inspired by their example, you can be adventurous with this unusual berry: add cloudberries to onion soup or make jellies, chutneys or sauces that you then brush on meat, poultry, fish or seafood.

Obviously, cloudberries can also be used as a substitute for other berries. To give your dishes a northern flair, add cloudberries to yogurt parfaits, make a cloudberry coulis or syrup, top your crepes or waffles with them or use them to garnish a cheesecake. Cloudberries are also made into a delicious alcoholic liqueur, which you can use to deglaze a pan, make a reduction sauce to drizzle over vanilla ice cream or savour on its own!

If you don’t get a chance to pick your own cloudberries during your stay in the Côte-Nord region, be sure to visit regional cloudberry producers to savour this delicious fruit in many forms. You can also visit Maison de la Chicoutai (Cloudberry House) in Rivière-au-Tonnerre, where you can learn more about this prized northern berry.

Here’s a recipe you can try that includes cloudberry syrup.

Wild Fruit Marinade (makes about half a cup)

Use on meat, poultry, fish, seafood or vegetables