Before I came to Québec for the first time, I’d made a list of all the things I wanted to do during my year of study in Matane, in Gaspésie. I wanted to see whales, beavers and moose (which I thought were caribou because I didn’t know the difference!). I was very impressed by the variety of wildlife found on this territory, in comparison with what you can see in France. What I didn’t anticipate was the awe I would feel seeing these animals.

It all began with a groundhog...

In the summer when I first arrived, I came across a groundhog in the middle of Matane, an unusual sight for a woman from France like me. I couldn’t quite fathom that such an animal could be found in the city! I stopped in my tracks and took shot after shot of the little creature.

The next spring, a local friend took us to the Réserve faunique de Matane, a wildlife reserve, where we saw an abundance of partridges and hares before I spotted my first moose in the forest. It took me a moment to absorb what I’d seen. It was a brown mass camouflaged in the trees. Then the pieces fell into place and I asked my friend to stop the car. I was so moved that I was having trouble expressing myself. Unfortunately, the moose had disappeared by the time we stopped, but I was over the moon with joy at having seen my first moose! (By then, I’d figured out that moose and caribou are not the same!) In France, it’s not easy to see such big animals in their natural environment. Luckily for the other passengers in the car, we also got a better glimpse of a young moose crossing the road in front of us. We were all thrilled by the sight! 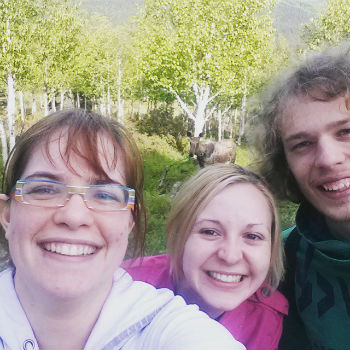 A few weeks later, my brother came for a visit, which was a perfect excuse to set off on another adventure. We visited Parc national de la Gaspésie in the early evening (we’d been told to go after 5 pm) to see moose during a hike up Mt. Ernest-Laforce. Again, we were lucky: we’d barely started the hike when we spotted a mother and her baby. What an incredible sight! Completely calm, the mother looked us over before resuming her grazing. They were so close to us, about 10 metres (30 feet) away, that the baby was intrigued by our presence and started to move in our direction. He was just like a kitten, approaching us with curiosity and then running back to his mother. I don’t know how long we stayed there admiring this beautiful scene. Minutes? Hours? I lost all track of time. A little later, we saw a male and female grazing just off the trail. It was a perfect opportunity

A moose and her baby© Benjamin Grimaud

to observe the antler growth on the male and take a few selfies with them. Nearly at the top, we spotted another male with a very impressive rack of antlers lying down in the tall grass. We all crossed our fingers that he wouldn’t charge us, even though we knew this behaviour is rare. I returned to the park a little later in the summer with my parents and my other brother and we were just as lucky: we saw eight moose! My family and the tourists behind us were blown away to see such large wild animals so close to the trail and yet in their natural environment.

That same summer, my friends and I also visited Parc national du Bic, in Bas-Saint-Laurent, where I got to see my first seal. Using binoculars, we watched a mother and her pup settle on the rocks to bask in the sun. We couldn’t help but laugh when we heard their barking cries.

… and ended with a whale!

This year, I visited the Bioparc de la Gaspésie and observed several animals in captivity that are indigenous to this region. I saw wolves, cougars and caribou (finally!) for the first time and was captivated by the little raccoons. The site was so interesting that we spent the whole day there.

My family came to see me again and we visited the Côte-Nord region. The variety of animals at the Ferme 5 Étoiles holiday resort is very impressive. We saw farm animals (geese, rabbits, chickens, pheasants, etc.) as well as rescued wild animals (white-tailed deer, lynx, silver foxes, porcupines, groundhogs, Canada geese, wolves, etc.). Unfortunately, we didn’t get to see the bison—that will have to wait until next time!

We also enjoyed a breathtaking experience: whale watching! Aboard a Croisières AML Zodiac, we set off into the Saguenay – St. Lawrence Marine Park and saw two fin whales with a minke whale, which

made us realize how large and majestic these animals are. We took in their presence even more when we all got quiet to listen to their blows, a unique sound. Excitement rippled through the people on the boat. Our pilot intuitively knew where to go and got us close to the whales while maintaining enough distance not to disturb them. Every now and then he shut off the motor. It was during one of these pauses that we experienced the highlight of the excursion: a young fin whale swam between our Zodiac and the one next to us. I even saw its blowhole! We then moved to a new location where we watched whales feeding. The guide explained that this is when they come out of the water. We saw the brief flash of a fin and then a head. Whale watching is an indescribable activity; you have to experience it to understand the mix of emotions we felt: admiration, excitement and a thrill of fear (we’re really small next to them), which led to many involuntary exclamations of admiration.

The icing on the cake happened while we were waiting for the Saint-Siméon – Rivière-du-Loup ferry and spotted several belugas, including one that was only about 20 metres (60 feet) from the wharf. I never thought I’d see such a pure white creature. Unlike other large whales, belugas regularly come to the surface, so we could track its movements by watching its silhouette under the water.

As you can see, since I arrived in Québec, I’ve been able to observe most of the mammals present in Bas-Saint-Laurent, Gaspésie and Côte-Nord. I’m still hopeful that I’ll get to admire a black bear in its natural environment and maybe even a blue whale! What about you, what animals are you hoping to see one day?

Categories Discover Our Regions What to Do