Did you know that Bonaventure Island, off Percé, boasts a rich and fascinating history? To illustrate this legacy and share it with visitors, the Société des établissements de plein air du Québec (SÉPAQ) has set up a program that showcases the island’s built heritage. The program focuses on different periods of the island’s settlement, from the modest cod-fishing activities under the French Regime, to the 18th and 19th centuries when the island was under the control of the Le Boutillier brothers fishing company from Jersey, to the 20th century when it became a popular destination for artists and vacationers who had studios or cottages on the island.

I met with Rémi Plourde, director of Parc national de l’Île-Bonaventure-et-du-Rocher-Percé, who took me on the guided hike, In the Footsteps of the Islanders, created as part of the SÉPAQ’s program.

Getting off the boat, we followed the trail to the Visitors Centre, located in a restored building once used as a dormitory for fishing employees who were temporarily staying on the island. I noticed that all the buildings near the wharf are painted in white and red, which Mr. Plourde said was a trademark of the Jersey companies.

Right next to the Visitors Centre, the Resto des Margaulx restaurant is located in a former warehouse originally built in Paspébiac (about 110 km or 70 mi. away). The boards were numbered before the building was dismantled and brought by boat all the way to Bonaventure Island, where it was put back together just like a giant puzzle. Interestingly enough, all the interior beams were chamfered, which means that the edge of their external corner has been beveled. Why? Besides producing an aesthetically pleasing effect, beams were chamfered to increase their fire resistance.

The visit as such begins at LeBoutillier House, which houses an exhibit about the cod-fishing industry, the ways fishing companies operated in the 19th century, as well as the lives of islanders. This house was the residence of the company’s manager on the island at the time. I smiled when Mr. Plourde mentioned the selection criteria for a manager: he had to be single or be willing to live without his wife on the island so he could focus solely on his work; he had to be from the island of Jersey; and he had to be Anglican (or at least Protestant) to make sure that the Catholic priest wouldn’t be able to get information about the company during confession. I just love those colourful historical details… 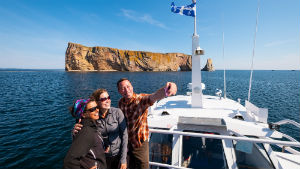 To get to the park, participate in a sea excursion and see majestic Percé Rock up close© Nadeau Julien, créateurs de contenu

We then took the Chemin-du-Roy trail along the south side of the island, which follows a path used by islanders during the 19th century. Since it was a beautiful sunny day, we were able to admire a stunning view of Percé, with Mt. Sainte-Anne in the background.

As we got further from the wharf and the main buildings of the LeBoutillier Company, we came across buildings from subsequent settlement periods, including Duval House. The original house was built in 1912 by William Duval, using materials from the house of his grandfather, Peter-Nicholas Duval, a colourful character who served as a privateer for the British. Because the house had been in such poor conditions, it was rebuilt using the original plans and traditional methods. The results are amazing: I really felt like I’d taken a step back in time!

A little further, we reached the old cemetery. A plaque at the entrance lists all the names of the islanders who were buried here as well as dates of death, which give an indication of the many tragedies that have shaken the island over the centuries.

Our visit ended in the cottage and studio of artist Kittie Bruneau, where chairs and tables have been set up so that visitors can rest while the tour concludes. This is also a great place for a quick lunch as you assimilate all the information you’ve just learned about the island.

Although the northern gannet colony is the island’s main attraction, Bonaventure Island is also worth visiting for its unique heritage. Take the time to follow in the footsteps of the islanders and discover another side of this island. Enjoy your visit!