For the last several years, Le Québec maritime has organized the “Win a Dream Snowmobile Vacation for 4 in Québec maritime” contest. Ontario resident Jean-Guy Charette was the lucky winner of the 2014-2015 edition. Mr. Charette and three of his snowmobiling friends rode the trails of Bas-Saint-Laurent and Gaspésie from February 5 to 11, 2016. We spoke to him about their adventure.

Le Québec maritime (LQM): Can you tell us about your trip? Was this your first snowmobile ride in Bas-Saint-Laurent and Gaspésie?

Jean-Guy Charette (JGC): Actually, my first snowmobile trip in Bas-Saint-Laurent and Gaspésie was in 1991, so last winter was my fourth visit! I love these regions because the people are really friendly. I did this trip with the same group with whom I crossed Western Canada in 2006; we’re used to travelling together. Everything went really well because the journey was well planned, with reasonable distances to cover every day.

LQM: What do you think distinguishes our regions from other snowmobile destinations?

JGC: Usually, there’s lots of snow, which is great because it keeps the trails in excellent condition. It’s also fun to ride through the mountains and see the sea.

LQM: Despite the vagaries of winter, how did you find the trail conditions (grooming, signage, etc.)?

"We were lucky to get lots of snowfall during our trip, so we rode on excellent trails."© Jean-Guy Charette

JGC: We were lucky to get lots of snowfall during our trip, so we rode on excellent trails throughout Gaspésie and Bas-Saint-Laurent. The snowmobile clubs do a great job with signage, which is very helpful for foreign tourists who are looking for services.

LQM: What did you love the most about our regions and why?

JGC: The scenery is beautiful throughout, especially along the north side of the Gaspé Peninsula. We also had superb food everywhere we went. I’d like to thank Le Québec maritime for our lodging, because all the hotels we stayed in were excellent. I also got to discover new places such as Auberge Beauséjour in Amqui, where we were particularly well received.

"I did this trip with the same group with whom I crossed Western Canada in 2006; we’re used to travelling together."© Jean-Guy Charette

LQM: What tips would you give snowmobilers who are visiting our regions for the first time?

JGC: When you visit Gaspésie, make sure to plan for shorter daily distances because you may be hit by heavy snowfall—the region often experiences severe snowstorms.

LQM: Have you visited other regions or countries to go snowmobiling?

JGC: Since 1985, I regularly go on trips of 10 days or more with snowmobiling friends. I’ve been all over Québec, Ontario and several American states.

Here’s a list of my main snowmobile trips over the last few years:

Next winter, I’m joining the MichCanSka team again, for the Maine to Michigan ride; from Maine, we’ll cross through New Hampshire, Vermont, New York and Ontario to get to Michigan. In 2018, I’m embarking on another major expedition that will take us on the Top of the World Highway in Alaska; first we’ll cross the American Midwest (Michigan, Wisconsin, Minnesota and North Dakota) and then six Canadian provinces and territories (Manitoba, Saskatchewan, Alberta, British Columbia, the Northwest Territories and Yukon). Another dream vacation!

LQM: How many kilometres do you travel by snowmobile each year?

LQM: What model snowmobile do you ride?

LQM: What would you like to visit on your next trip to our regions?

An avid snowmobiler, Mr. Charette is happy to be able to promote our regions. Thank you for telling us about your trip; we look forward to welcoming you again!

M. Charette’s 2016 Itinerary in Our Regions

Tags snowmobiling
Categories Discover Our Regions What to Do in Winter 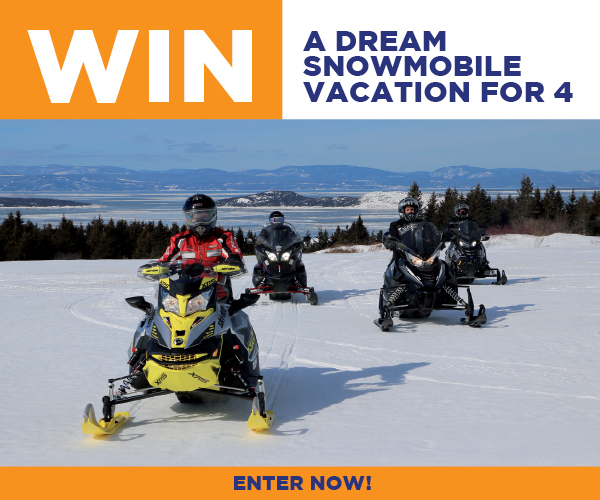